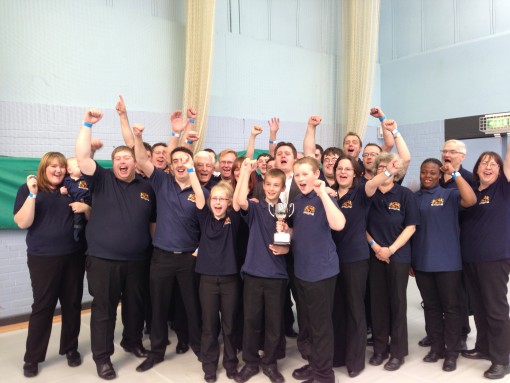 After all of their recent hardwork, Blackley Band claimed 1st prize in the 4th section at Bolsover Entertainments Contest.

It was an early start with the coach leaving the bandroom at 8am, after a rehearsal in a dance studio in the school we took to stage at around midday to perform our 20-minute programme of animated/childrens favourites. It was not your standard band formation, with the cornets and trombones stood for the duration of the performance on the outside of the rest.

We kicked off with the Dreamworks Fanfare, complete with boy on the moon, followed by The Incredibles theme where the solo in the middle was performed by our repiano player Ian Elston. Tara (flugel) stood up and performed the wonderful That’ll Do from ‘Babe: Pig in the City’, Aladdin and One Jump Ahead was next with the first of our Disney classics. The Romantic Flight from ‘How to Train your Dragon’, Dan’s favourite film, provided hymn-like tranquility to the programme and Chrissy (prinicipal cornet) started us off as introductions were still going on to add to the entertainment value. Finally we played the classic Circle of Life from ‘The Lion King’ complete with chanting and solos from Adam (euphonium) and Jamie (horn).

The whole programme was incredibly well received by the audience and we only had a short time to wait before the results were announced. During the adjudicators comments he mentioned how it was nice to hear a band play original music and to be entertaining along with it. Obviously the band were ecstatic with the result but we also received very positive feedback from other bands who had been in to watch or who had heard about our performance.

A special mention has to go out to Tomasz Whitehead and Paul Stringer who were playing their first contest with us on percussion, they both came along recently and fit right in to the band. A special thanks also to Chalce Williams, Ian and Jack Eastwood who stepped in to fill a couple of gaps.

We are now looking to build on this success in to St Helens contest in November and in to 2014 at Preston and Blackpool.